The heritage of A.G. O’Connor Pty Ltd can be traced back four generations to 1894 when the firm of T. O’Connor & Sons was founded in Topham Street by Thomas O’Connor, as a plumbing and gas fitting company. 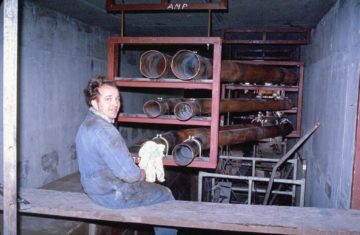 In the 1920’s Frank O’Connor took over with his brothers, Tom and Martin O’Connor, diversifying into sheet metal work, heating and ventilation, industrial pipework and steel fabrication, and later progressing in to air conditioning after its invention.

In 1961, a new purpose built factory and office complex was built at Gepps Cross and opened by Sir Thomas Playford.

Under Frank and Martin’s guidance and subsequently that of Creagh O’Connor and Henry O’Connor, the company’s operations grew substantially, undertaking major steel fabrication projects such as the Coal Handling Facility at the Northern Power Station and significant air conditioning contracts across Australia and internationally. These projects include the mechanical, electrical and plumbing contracts for the US Embassy in Moscow, Russia and Cairo, Egypt.  A number of other projects were undertaken in Egypt including the 1250 room Marriott Omar Khayyam Hotel, along with the Australian Embassy in Bangkok which Alan Porter managed.

The company was also the general contractor for the construction of the then largest waste water treatment plant in Jordan, in the city of Irbid, and also the Rama Gardens Hotel, in Bangkok, Thailand.

A significant building for O'Connors is 1 King William Street in Adelaide (the old AMP building) which was air conditioned by T. O'Connor when originally contracted, and is still serviced and maintained by O’Connors today.

With the formation of O’Connors in 1999 the brand continues benefiting greatly from the passion of the Managing Director Andrew O’Connor and the discipline of its General Manager Alan Porter. Their drive has led to O’Connors successful involvement in the health, education, retail and defence industries.

O'Connors was started by Andrew O'Connor, a Chartered Professional Mechanical Engineer, with founding Chairman Malcolm Kinnaird AC, a former South Australian of the Year and a leading Australian engineer. Malcolm was followed by Creagh O’Connor who, during his time with O’Connors, has added his industry passion to the development of our people.

The culture of developing our people has continued for over a century with many from the days of T. O’Connor & Sons now developing the current generation of leaders at O’Connors. At our custom designed premises in Kent Town our teams are delivering new projects for South Australia and ensuring these new buildings are built with energy efficient mechanical systems for the long term.

We Are Open and Monitoring the Spread of COVID-19

O’Connors and the building and construction industry at large, remains open.

The grant is an opportunity for engineering students heading into their final year to gain financial support and experience in the field.